Walking around the Old Town area of Hanoi in the afternoon confirmed my thoughts on how much it reminded me of some of the quieter Bombay streets. Shops piled up their wares on the pavement, hung up in string lengths, ladies sat on the pavement selling vegetables in great wicker baskets, so much like Breach Candy (for those who know the area!) 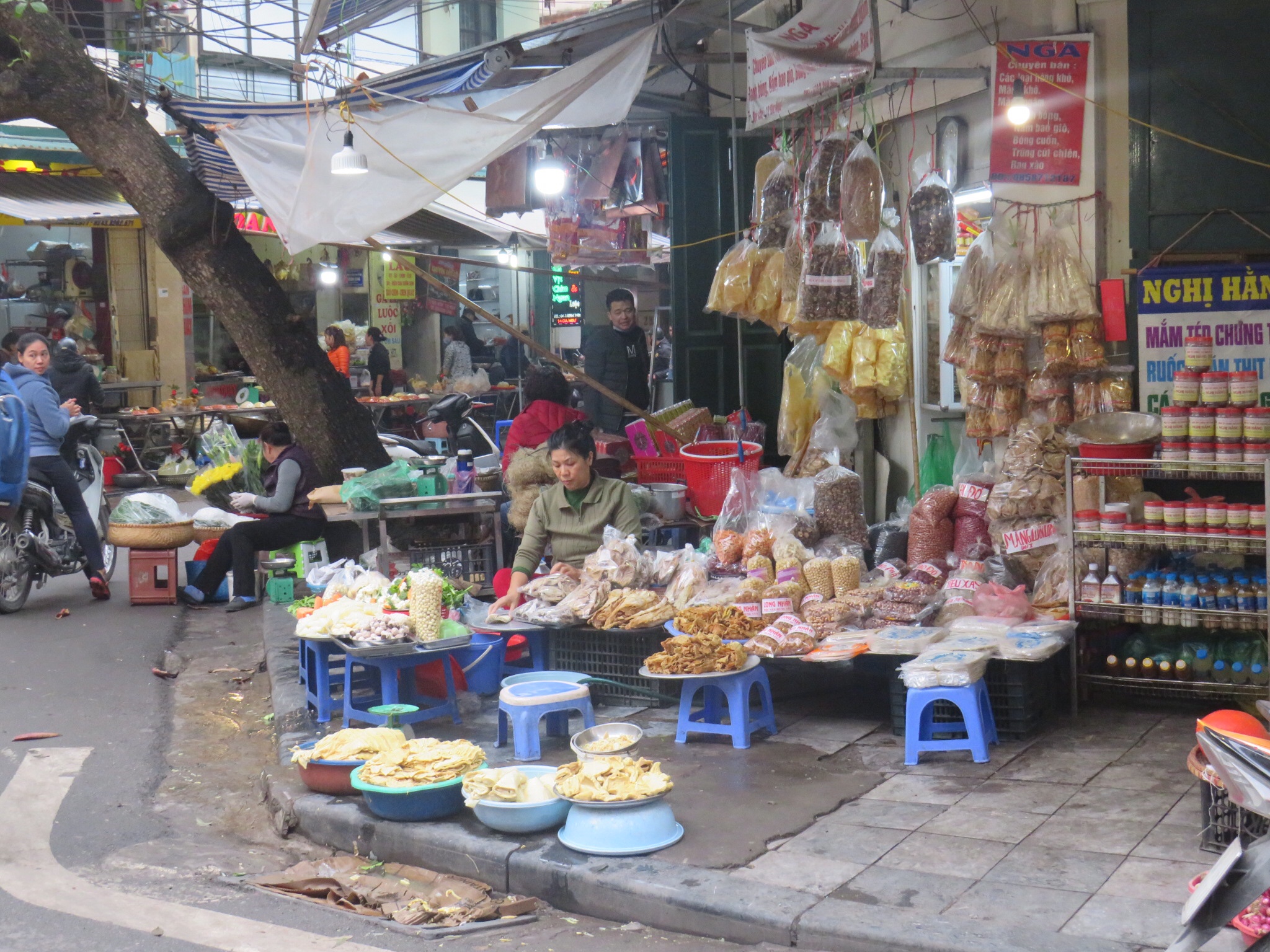 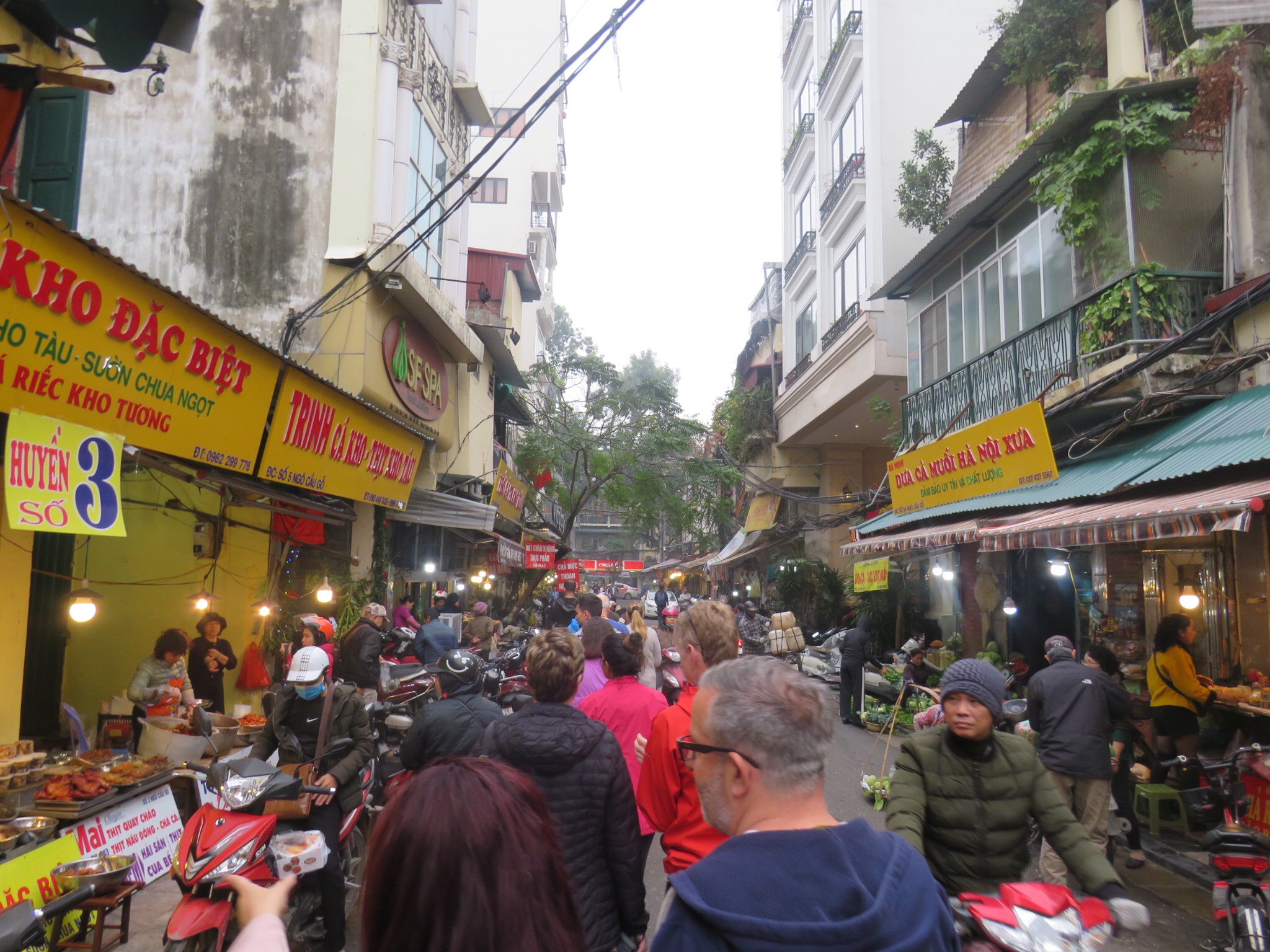 As you can see from the pictures, it was a grey day which just added to that whole austere vibe, maybe in the summer it is different.

Main form of transport are push and motor bikes, just adding to the rush and chaos. 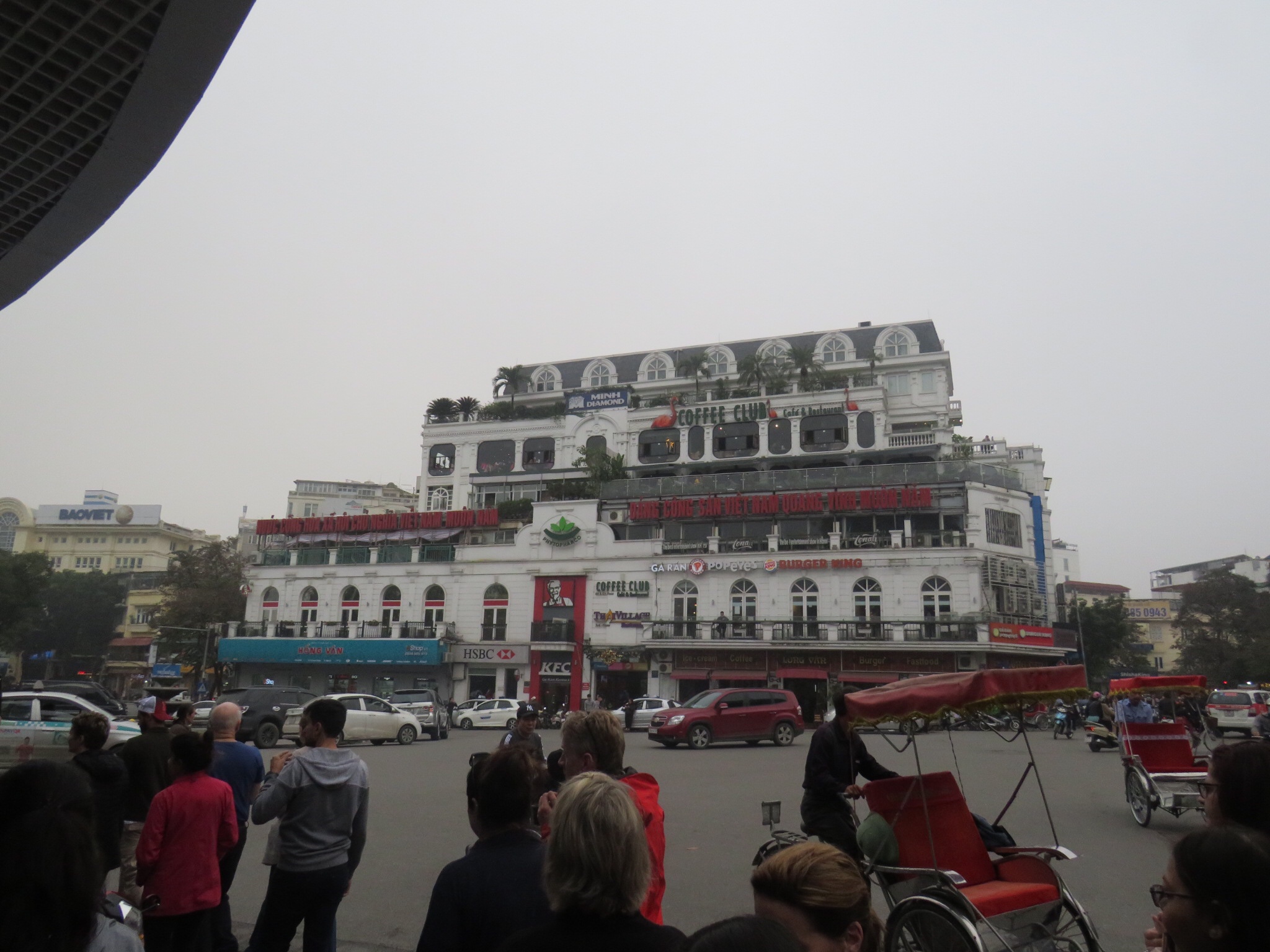 We then got ready to get on the ‘Reunification Express’, the overnight train to Hue (pronounced a bit like WHEY), a 4 berth cabin sleeper which was described as ‘not like the Orient express but the highest class of train available in Vietnam ! Cabins are comfortable though not comparable to European standards, with western style toilet with a varying degree of cleanliness’ !?!?

I had chosen the train option as I thought that it would be good to experience something different and you can see so much more from a train, BUT it was at the point of embarkation I wished that I had taken the flight option instead..

(As an aside, I am sat in Phnom Penh airport waiting for my flight to Singapore, what is it with people who think that it is ok to talk into their phones really loudly with the other person loud speaker? Drives me mad. I am going to try and video it for you, may be illegal, not sure….

Terribly unflattering me but you get the picture!

Anyway, back to the sleeper train, the last one I went on was with my grandparents when I was about 15 to Mount Abu.

The tour company had advised that we take sleeping bag liners to ensure hygiene (shock emoji) so I really was wondering what I was getting on to.

As you can see from the picture on the left, all was fine, an air conditioned carriage with nice clean sheets and pillows. The western style toilet was clean, it was just a bit rocky sat on there as the train rattled along!!

My cabin mates were Maria, Jen and Louise and I think we did ok! As I was on the top bunk on the left, I decided to go slow on liquid intake as there was no way that I would survive the climb down in the night. We were all thrown around a bit and we came to a screeching halt at times but the morning rewarded us with fabulous scenes across the countryside, with the locals going through their daily routines. This is the countryside that I was looking for, the paddy fields, buffalo and the people do wear conical hats!

Trains are always such a great experience, be they the local 2nd class seats or a better ‘tourist class’. You see the real scenery.

Hue is a world heritage site as it was the empire capital in 19th century. The Imperial Palace is beautiful, and the home of the Nguyen Empire, set inside a Citadel and Royal Enclosure, built between 1804 and 1833.

The evening was a Dragon Boat cruise along the river.

We were taken to have lunch in a lovely garden, we were told that the place belonged to the chef of the royal household. A lovely setting and the presentation of the food added to the whole experience.

From what I understand, Hue was an important city in the history of Vietnam, geographically in the centre, it was an ideal place to rule from. We did get a potted history of the Chinese, Vietnamese and how the Emperor’s gained a vantage point depending on who they traded with and how power war allocated etc. However, when I and others asked about how the south area of Champa, previously a self ruled area, and other more detailed and searching questions regarding the formation of Vietnam as it is today, I am not sure we were given an answer.

I really don’t want to sound like a conspiracy theorist, that’s not what I mean, but just that possibly there is a a set view that we are being given as that is how things are, and that’s ok. I just find the whole country fascinating and beautiful.

Overnight in Hue and then onto the Road of the Ocean Clouds from Hue to Hoi An.

Off to find dinner now….